Last week I reported that casualties among cyclists have been rising, presumably due to increased rate of cycling. Today I got more data from the DfT, which confirms cyclists are at considerably higher risk than car drivers in both urban and rural areas.

Last week I noted that cyclists were 14 times as likely as motor car drivers to be injured per mile travelled, and I wondered if maybe the great difference in risk was due motorways being very safe places for a good part of the journeys made by cars. I asked the DfT to clarify this.

Today, a very nice spokesperson from the DfT sent me data from 2009 which shows that casualty rates (per mile traveled) for cyclists were 10 times greater than those for car occupants. If we remove the motorway from the equation the ratio improves: in urban areas, cycling is 8 times more dangerous than car driving, and in rural areas it is 'only' 6.5 times more dangerous.

However, within urban areas, on A roads, cyclists were 17 times as likely to be injured as people in cars, per mile travelled. (see table below). While we may argue that cyclists travel less miles, so suffer less overall risk of injury, we must still be concerned that the risk per mile traveled is so much higher for cyclists, especially on urban A roads - which, in my town, are often designated cycle routes.

This is a powerful argument for constructing segregated cycle routes to separate cyclists from A road traffic. 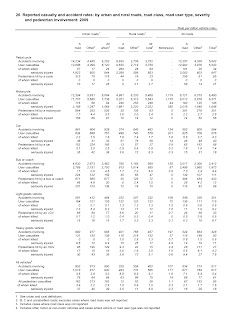