A student project in news journalism. We had one to day to record and edit our first video news project. The news headline in the Brighton Argus that morning, was a young soldier killed in Afghanistan. We went to George Street in Hove to ask passers by whether it was time for British troops to leave Afghanistan. Of the ten people who agreed to talk to us on video, around two thirds thought it was time for troops to leave, while one third thought that that the soldiers should stay.

I came across a burning car whilst hiking in Stanmer Park. I phoned the fire brigade, then took photos and sent them to the Argus. This story did not get published, despite my scoop. Cars are set alight quite often.

11 October 2009. A car was torched in Stanmer Park on Saturday night. The Fire Service was alerted at 7pm. A fire crew arrived fifteen minutes later, to find the car ablaze, in the car park, which is situated in a small wood at the entrance to Stanmer Park, behind the University of Sussex Sports Centre, off the Lewis Road.

The fire burned fiercely until the fire crew aimed a fire hose at the car. The fire was extinguished by 7:30pm.

A Fire Officer, who did not wish to be named, said that the fire crew had used “One in Seven foam”. He said: “Instead of using water you can stand further back, it has a faster knock down time, so it’s going to know the fire down sooner, because it smoothers as well as cools, whereas water just cools.”

Simon Hills of the West Sussex Police said that the torched car was a three-door Vauxhall Corsa. He said that matter is under investigation, but that they are treating it as ‘deliberate ignition’.
A local man, who watched the firemen extinguish the fire, said that there have been a few cars burned in the park over the years, but that this was the “first in a while.” 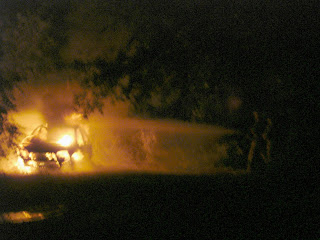 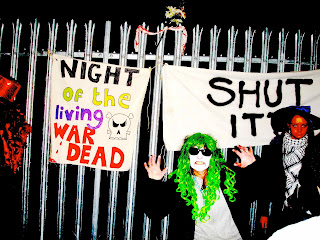 Arms trade protesters paraded as 'living dead' in a Halloween stunt outside the EDO/ITT defence factory in Home Farm Road, Brighton, on Wednesday October 28, from 4pm to 6pm. 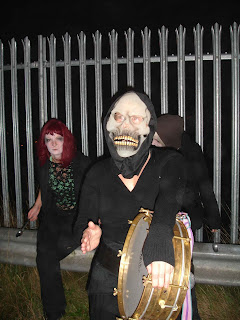 Around 25 protesters wearing a variety of Halloween costumes made noise by banging on the steel railings along Home Farm Road, and banging on drums. They used megaphones to appeal to workers in the factory to consider the use to which their products would be put.

Around ten police officers observed. They did not intervene except to warn a protester not to obstruct the road. 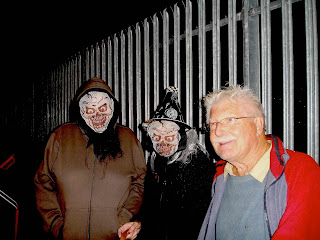 Veteran EDO protester John Catt was at the event. He said that people would not accept an unregulated arms industry. John Catt and his daughter Linda Catt have been in the news since they were pulled over by antiterrorism police in London, because Sussex Police had ‘marked’ their number plate at peaceful Home Farm Road demonstrations in 1995.