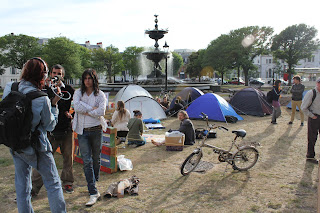 9 June 2011. Protesters occupying the Old Steine in central Brighton agreed to quit their camp, according to Councillor Ben Duncan, Cabinet Member for Communities in Brighton and Hove City Council.

He said: "We respect the right to peaceful protest and will facilitate it where possible but we will take action where necessary to fulfil our duties as a council and these include ensuring public parks are protected for the whole community.

"The right to peaceful protest does not include the right to camp in public parks and we will uphold local bylaws to prevent this. We have accommodated the protesters' protest and allowed them to make their point and they have behaved well so far and we expect them to leave this Sunday. It's good news that they have promised to move on and I expect them to fulfil that promise."

The following pictures capture the spirit of the non-violent protest...
(to see photos click Read More)

The following report was posted today on Brighton and Hove News

After the Naked Bike Ride through Brighton on Saturday (11 June), next weekend it’s the annual London to Brighton event.

And it’s the one day of the year when cyclists will be barred from taking their bikes on the train.
The British Heart Foundation, which runs the London to Brighton Bike Ride, has once again organised a coach and lorry service to take cyclists and their bikes to and from the event.

Details of road closures have also been announced.

Southern Railway said that on Sunday (19 June) there would be an all-day ban on bikes at Brighton, Hove, Portslade and all the other stations in the city.

The ban extends north to Three Bridges, east to Eastbourne and west to Chichester Station.
Outside this area, bikes can be carried on board trains after noon provided they are heading away from Brighton and Hove.

On Saturday (18 June) Southern is warning passengers with bikes that they may suffer delays because each service can hold only a limited number of bikes.

A queuing system will be in place for the day – and again on Monday (20 June) when the usual peak-time restrictions will also apply.

The restrictions can be found at www.southernrailway.com/cyclepolicy.
For more information about the bike ride, go to http://www.bhf.org.uk/get-involved/events/bike-rides/london-to-brighton/faqs.aspx.

A number of roads will be closed on Sunday in and around the area and others will have restrictions in place. They include

27 May 2011. Brighton and Hove City council approved its Local Transport Plan (LTP) with all three main parties giving the document their unanimous support.

The plan was due to be approved in March - but the Tory admin delayed the council debate until after local elections 5 May.

A source said that when the Green Party won control of the council they adopted the plan without amendments to avoid delay since an LTP is required for government grants.

In any event the plan was supposed to be politically independent and produced in line with national policy which encourages sustainable transport according the Government's January White paper on Transport.

Earlier report on LTP3
Posted by Russell H at 20:30 No comments: