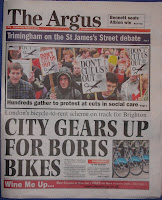 "City gears up for Boris Bikes" was the headline in today's Argus. "City gears up for budget protests" was a more pertinent alternative. The cross-party protest against the Conservative proposed budget was relegated to inside pages. The trade union-organised Stop The Cuts protest, scheduled for tomorrow and expected to attract "hundreds" of supporters, was relegated to the bottom of page seven, and the story that Green and Labour have promised to unite to defeat the budget was on page two.

The "exclusive" bike story by Tim Ridgeway read: "Council bosses are in talks with businesses about ways to introduce the iconic blue communal cycles." Leaders and spokespeople from all the major parties were interviewed and all expressed their support for a bike hire scheme. The article says the scheme would be dependent on sponsorship to cover the investment.

But this is not news - the council has been examining ways to get a bike hire scheme going for months, if not longer. Has a sponsor been found? No mention of one in the article. The bike hire story is thin on facts. There is no announcement of progress, or of any commitment to the scheme from anyone. So why is it on the front page of the Argus now?

Could it be an attempt to back track on the anti-cycling stance implied by the Conservative determination to demolish the city's European-style cycle freeway?

Or is this bike hire story, and the plan to demolish Hove cycle lanes, all part of a scheme to divert local attention away from the massive cuts the administration is making to public services. A local "straw dog" rather like the national government proposal to privatise the publicly owned forests, a policy that the Conservatives must have known would attract united opposition, which would consume the attention and resources of that opposition, and a policy they could easily U-turn on. And maybe even come out looking like an administration that cares and is flexible. Leaving them room to be tough where it counts - on cuts to public services.

If the local Tories are really so cunning as to try a stunt like this, they risk a big back-fire. They may end up simply uniting the opposition, and the populace, and losing the local election scheduled for 5 May by a big margin - a risk central government doesn't run just yet.

I predict we won't get a commitment on Boris Bike Hire in Brighton until after the local election, when we will know whether the cycle-lane-crushing, social-services-axing Conservative administration remains in power or not. So let's go ahead and attend the cycle protest tomorrow, and those who want to, cycle to Brighton to join stop the cuts later.

The front page of today's Argus is copied above. Cuts protesters are in fact featured - but the protest photo is of a past event. No mention on the front page of the much bigger protest scheduled for tomorrow. Another straw dog, Argus?
Posted by Russell H at 19:32