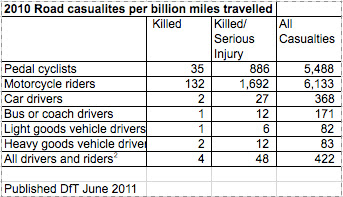 Statistics released by the UK's Department for Transport show that cyclists are 14 times more likely to become casualties on British roads, when compared with car drivers, per mile traveled (extract above, link to detailed stats below).

The statistics include all journeys including motorway journeys, which have very low accident rates - but no cycles. I presume if we compare stats for urban roads the two modes of transport will show more similar causality rates. I have asked the DfT for data filtered to show urban areas only, and hope to present it on this blog when it becomes available.

We need to know accurate data for urban areas because perceived safety is one of the most important issues for people deciding whether to cycle to work and school, according to Cycling England studys.

These statistics need to be taken with caution. The number of miles journeyed is an estimate based on manual roadside traffic surveys. I've mentioned one factor - motorway journeys - that make car stats look safer.

Ken Kifer's study suggests that experienced cyclists (such as members of the UK's CTC) have far fewer accidents than inexperienced riders, and says cyclists, who travel fewer miles than motorists, and have a healthy lifestyle, are overall living less risky lives. Other experienced cyclists say cycle accidents are rare, and any risk is balanced by increased health benefits (Guardian discussion).

Do these statistics have an impact on our 'real' lives? My local paper (Brighton Argus) tells me people are being injured every day driving their cars, more so, it seems, than walking or cycling. I know of a couple of people knocked off their bikes by cars at junctions and corners.

So far as I know only one cyclist has been killed in Brighton and Hove in the past few years. Student Joanna Walters was killed while cycling on a cycle lane that forms part of the national cycle network. The cycle lane at times runs along the hard shoulder of a busy dual carriageway, and Joanna was struck by a van at the pinchpoint formed by the underpass.

Many motorists have died in the same period - hence we have the impression that cycle accidents are rare.

Although the number of cycle casualties is low compared to motor car casualties (because in the UK only 2% of trips are made by cycle), if we are to increase cycling to European levels, there could be a fifteen fold increase in cycling.

We cannot ignore these statistics while telling adults to cycle to work and parents to let their kids cycle to school. They already perceive cycling as dangerous (Cycling England survey), and if anything the stats back them up. If its not as dangerous as all that, lets see the data. If DfT is serious about addressing this issue, as Norman Baker says it is, it will analyse the data to provide real information about the relative safety of cycling (and walking) in urban areas - compared to traveling in cars or buses. The DfT may then wish to take a more systematic approach to providing safe cycling routes for inexperienced cyclists, if it is to be credible about aspirations for sustainable transport. This means taking a close look at what's been done in cities like Copenhagen and Amsterdam to make cycling safe.