The first of my stories in the Argus: Cycling! 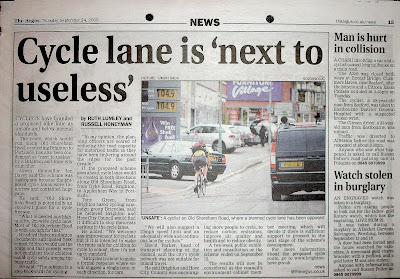 Ruth Lumley of the Argus kindly pared down my article on cycling. You can see how skilful she is with the sub-editor's knife, when you compare with my original text, below.


Cycle lobbyists and Green councillors have criticised the proposed cycle route scheme along the Old Shoreham Road, which would connect town centres in Brighton, Hove and Portslade. They say that it will not be considered safe by the parents of school children who are expected to use the route to cycle to school, and that it is below the standard expected of Brighton and Hove as a “Cycle City”. Initial public consultations for the scheme closed last week.
Brighton and Hove’s Green party condemned the scheme as “next to useless.” In an interview on 18 September 2009, Green Councillor Ian Davey explained: “Old Shoreham road is potentially an excellent place for a ‘cycle freeway’, like that down the Drive, ie, protected by a kerb. What is needed is a high quality, two-meter wide cycle lane; most of Old Shoreham Road is wide enough for that. “
Davey said: “The scheme as proposed is not going to be adequate. Cycle lanes are too narrow and there are huge gaps. Consultation documents anticipate that 7,000 schoolchildren will use this route, that’s a lot of inexperienced cyclists, aged eleven and above. The scheme will not give parents the confidence that their children can safely cycle along this route amongst busy traffic.”
“As proposed, the scheme is a step backwards for cycling. In my opinion, (the council planners) are scared of reducing road capacity for motorised traffic, so they have been tinkering around the edges for the last decade. There are too many useless cycle provisions around the city already. It is better to do a small amount of work well, than a lot badly. It is below the standard of infrastructure if we are to live up to our status as a “Cycle City”, Davey said.
Mr Tony Green, Membership Officer of Brighton-based cycling campaign group, Bricycles, said: "We welcome any improvement for cyclists. But if it is intended to make the route safe for kids to cycle to school, then it's not up to standard." Mr Green objected that the lanes have breaks in them; that they are of varying width, being 1.2 to 1.5m wide; and that the council may find it difficult to stop (motorists) parking in the cycling lanes.
Mr Green added: "Bricycles is about to make a formal response, where we will suggest a single lane (in each direction) for cars, and a 20mph speed limit and an
adequately wide and continuous lane for cycles."
The council’s Head of Transport Planning (Sustainable Transport), Mr David Parker, was at the exhibition. He told the Argus that, at present, most cycle traffic uses the cycle route along the seafront, which is part of the National Cycle Network. This is not convenient for many inland travel routes. Brighton and Hove City Council wants more people to cycle, especially kids to cycling to school. This is not only to reduce carbon emissions, and improve air quality, but also to improve health and reduce obesity. A Personal Travel Planning campaign provides consultations across city, to develop travel plans on an individual basis. Mr Parker left the exhibition on his bike, saying 'practice what you preach."
The proposal, if successful, would see cycle lanes going in each direction along the Old Shoreham Road (A270) from Dyke Road in Brighton, via Goldstone Crescent in Hove, to Applesham Way in Portslade. Two weeks of public exhibitions about the scheme ended on Saturday, 12 September 2009. Members of the public were invited to inspect plans of the scheme, and to consult with Brighton and Hove City Council planning officers. The results of the consultation will now be considered by the Environment Cabinet, which will decide if there is sufficient support to proceed to the next stage of scheme development.

The scheme is part of Brighton and Hove's involvement in the "Cycling Towns" project, in which seventeen towns and cities will receive part of £100 million in funding being provided by Cycling England, an independent body established in 2005 by the Department for Transport.