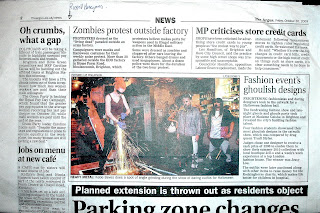 My story made the news! As published in the Argus above, as written by me, below.

Arms trade protesters paraded as 'living dead' in a Halloween stunt outside the EDO/ITT defence factory in Home Farm Road, Brighton, on Wednesday October 28, from 4pm to 6pm.   Around 25 protesters wearing a variety of Halloween costumes made noise by banging on the steel railings along Home Farm Road, and banging on drums. They used megaphones to appeal to workers in the factory to consider the use to which their products would be put.

Around ten police officers observed. They did not intervene except to warn a protester not to obstruct the road.   Veteran EDO protester John Catt was at the event. He said that people would not accept an unregulated arms industry.

John Catt and his daughter Linda Catt have been in the news since they were pulled over by antiterrorism police in London, because Sussex Police had ‘marked’ their number plate at peaceful Home Farm Road demonstrations in 1995.
Posted by Russell H at 12:06